Knoxville, Tennessee, July 27, 2020 – Mountain Commerce Bancorp, Inc. (the “Company”) (OTCQX: MCBI), the holding company for Mountain Commerce Bank (the “Bank”), today announced earnings and related data as of and for the three and six months ended June 30, 2020.
Highlights
The following tables highlight the trends that the Company believes are most relevant to understanding the performance of the Company. As further detailed in Appendix A to this press release, (i) adjusted results (which are non-GAAP financial measures) reflect adjustments for investment gains and losses and the impact of PPP fee amortization, net of costs and (ii) adjusted results excluding provision for loan losses (which are also non-GAAP financial measures. See Appendix B to this press release for more information on our tax equivalent net interest margin. 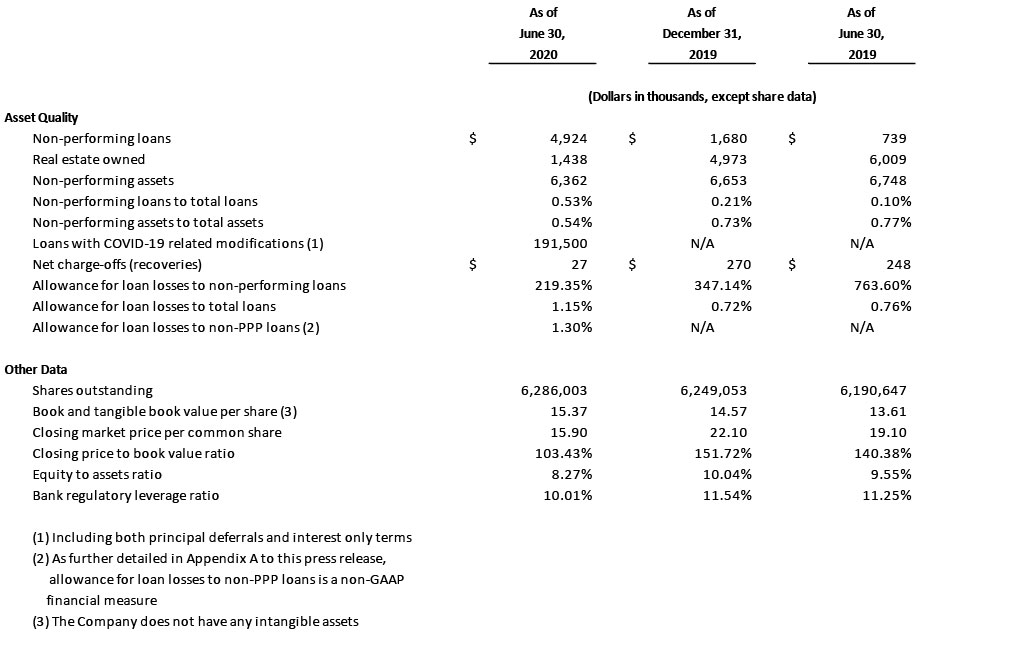 Management Commentary
William E. “Bill” Edwards, III, President and Chief Executive Officer of the Company, commented, “We are pleased with our second quarter results which continued to be strong with our adjusted net income excluding the provision for loan losses increasing 33% from $2.7 million in the second quarter of 2019 to $3.6 million in the same quarter of 2020.  As a result of the continuing economic downturn, we adjusted several components of our allowance for loan losses model, which contributed to an additional $3.5 million of reserves in the second quarter of 2020, bringing our allowance to non-PPP loans to 1.30%.  During these uncertain times, we believe it is particularly important to operate efficiently, which is reflected in our adjusted efficiency ratio dropping below 41% this quarter. The Company has also been a significant participant in the Paycheck Protection Program (PPP), funding 765 loans for over $107 million in principal amount and generating fee income of nearly $3.5 million, which will be recognized over the life of the PPP loans.  The Company recently announced that it successfully raised $10 million of subordinated debt in a private offering to institutional accredited investors.  This offering closed on July 15, 2020.  While we are currently well capitalized, the subordinated debt will provide an additional source of strength and capital for the Bank should our borrowers be more negatively impacted by the economic disruption associated with COVID-19 than we currently anticipate. Finally, as we look ahead, we intend to look for opportunities to grow our franchise, while staying focused on what we do best – relationship banking.”
Net Interest Income
Net interest income increased $1.5 million, or 22.2%, from $6.9 million for the three months ended June 30, 2019 to $8.5 million for the same period in 2020.  The increase between the periods was primarily the result of the following factors:

The following summarizes changes in loan balances over the last three quarters: 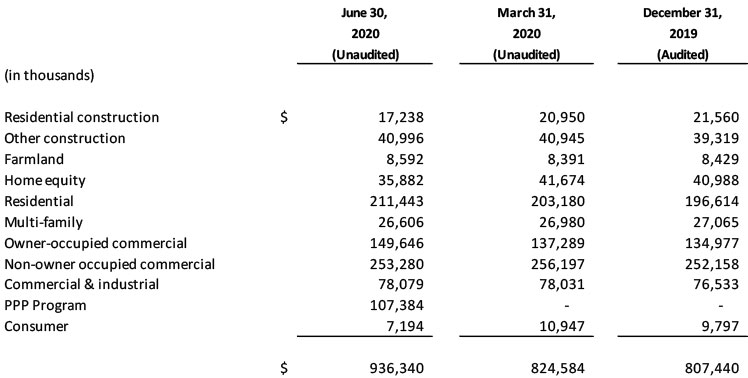 Total deposits increased $142.1 million, or 18.7%, from $757.9 million at December 31, 2019 to $900.0 million at June 30, 2020.  In addition to the increase in noninterest-bearing deposit balances resulting principally from the PPP program, wholesale deposit balances increased $44.7 million, or 54.6%, from December 31, 2019 to June 30, 2020 due to the Company’s decision to maintain higher levels of liquidity during the economic downturn.
The following summarizes changes in deposit balances over the last three quarters: 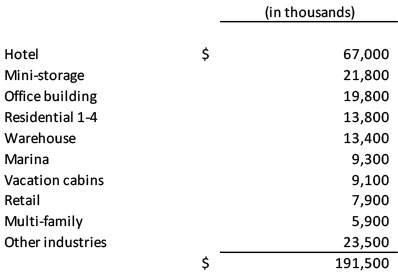 Other industries not detailed in the table above including restaurants, automobile, medical, entertainment, and others were individually below $5 million of exposure.  Approximately 57% of the deferrals involved principal, while 43% involved an interest only period.
Non-GAAP Financial Measures
Statements included in this press release include non-GAAP financial measures and should be read along with the accompanying tables in Appendix A, which provide a reconciliation of these non-GAAP financial measures to the most directly comparable GAAP financial measures.  This press release and the accompanying tables discuss financial measures such as adjusted net income, adjusted diluted earnings per share, adjusted return on average assets, adjusted return on average equity, adjusted net interest margin, and adjusted efficiency ratio, both including and excluding the provision for (recovery of) loan losses, which are all non-GAAP financial measures. We also present in this press release and the accompanying tables the allowance for loan losses to loans excluding PPP loans which is also a non-GAAP financial measure. We believe that such non-GAAP financial measures are useful because they enhance the ability of investors and management to evaluate and compare the Company’s operating results from period to period in a meaningful manner.  Non-GAAP financial measures should not be considered as an alternative to any measure of performance calculated pursuant to GAAP, nor are they necessarily comparable to non-GAAP financial measures that may be presented by other companies.  Investors should consider the Company’s performance and financial condition as reported under GAAP and all other relevant information when assessing the performance or financial condition of the Company.  Non-GAAP financial measures have limitations as analytical tools, and investors should not consider them in isolation or as a substitute for analysis of the Company’s results or financial condition as reported under GAAP.
Forward-Looking Statements
This press release contains forward-looking statements. The words “expect,” “intend,” “should,” “may,” “could,” “believe,” “suspect,” “anticipate,” “seek,” “plan,” “estimate” and similar expressions are intended to identify such forward-looking statements, but other statements not based on historical fact may also be considered forward-looking. Such forward-looking statements involve known and unknown risks and uncertainties that include, without limitation, (i) further deterioration in the financial condition of our borrowers resulting in significant increases in loan losses and provisions for those losses, (ii) the effects of the emergence of widespread health emergencies or pandemics, including the magnitude and duration of the COVID-19 pandemic and its impact on general economic and financial market conditions and on our and our customers’ business, results of operations, asset quality and financial condition; (iii) deterioration in the real estate market conditions in our market areas, (iv) the impact of increased competition with other financial institutions, including pricing pressures, and the resulting impact our results, including as a result of compression to our net interest margin, (v) the further deterioration of the economy in our market areas, (vi) fluctuations or differences in interest rates on loans or deposits from those that we are modeling or anticipating, including as a result of our inability to better match deposit rates with the changes in the short-term rate environment, or that affect the yield curve, (vii) the ability to grow and retain low-cost core deposits, (viii) significant downturns in the business of one or more large customers, (ix) our inability to maintain the historical growth rate of our loan portfolio, (x) risks of expansion into new geographic or product markets, (xi) the possibility of increased compliance and operational costs as a result of increased regulatory oversight, (xii) our inability to comply with regulatory capital requirements, including those resulting from changes to capital calculation methodologies and required capital maintenance levels, (xiii) changes in state or Federal regulations, policies, or legislation applicable to banks and other financial service providers, including regulatory or legislative developments arising out of current unsettled conditions in the economy, (xiv) changes in capital levels and loan underwriting, credit review or loss reserve policies associated with economic conditions, examination conclusions, or regulatory developments, (xv) inadequate allowance for loan losses, (xvi) results of regulatory examinations, (xvii) the vulnerability of our network and online banking portals, and the systems of parties with whom we contract, to unauthorized access, computer viruses, phishing schemes, spam attacks, human error, natural disasters, power loss and other security breaches, (xviii) the possibility of additional increases to compliance costs as a result of increased regulatory oversight, (xix) loss of key personnel, and (xx) adverse results (including costs, fines, reputational harm and/or other negative effects) from current or future obligatory litigation, examinations or other legal and/or regulatory actions. These risks and uncertainties may cause our actual results or performance to be materially different from any future results or performance expressed or implied by such forward-looking statements. Our future operating results depend on a number of factors which were derived utilizing numerous assumptions that could cause actual results to differ materially from those projected in forward-looking statements. 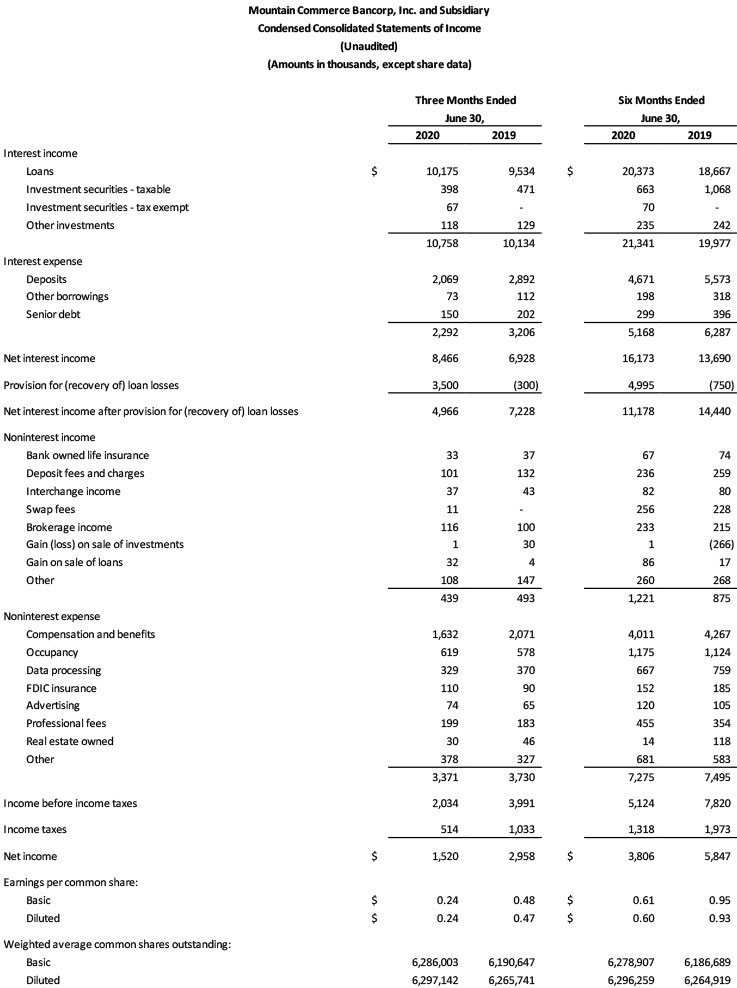 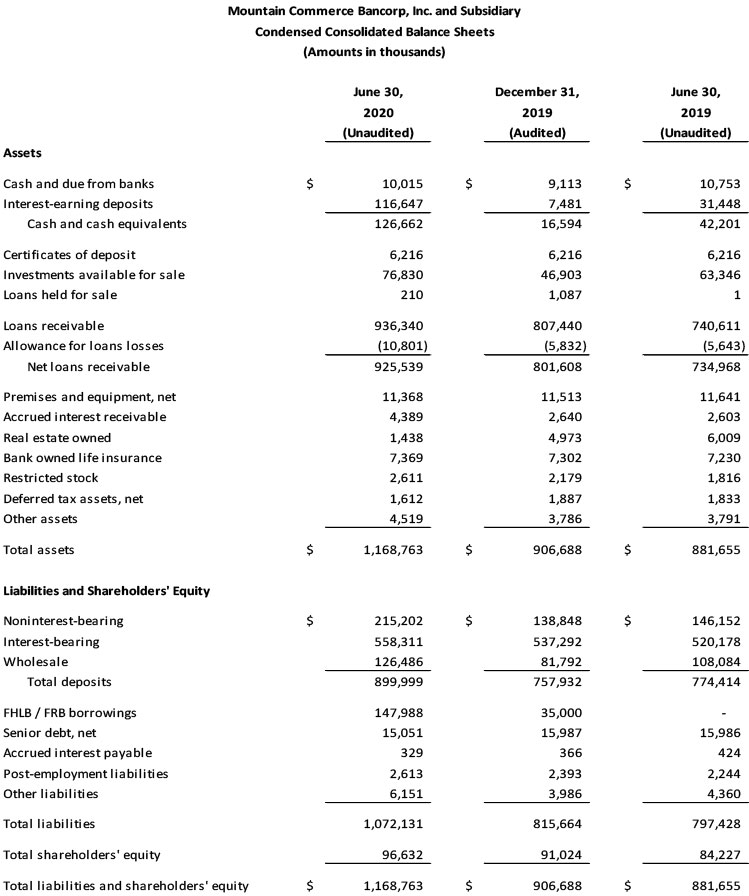